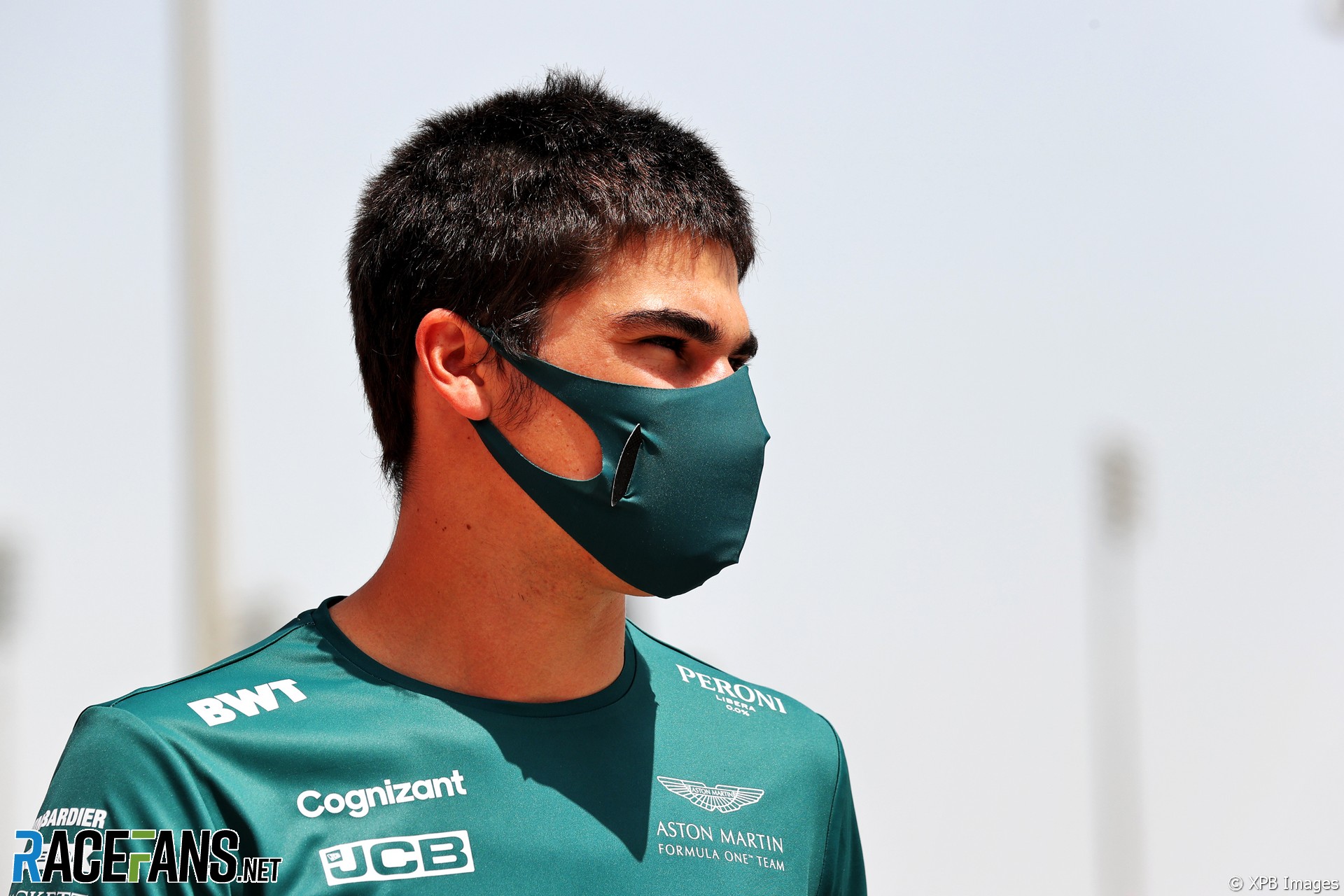 Lance Stroll was a mere 11 years old when Ferrari signed him to their driver academy in 2010. From that point it seemed inevitable he would eventually make it into Formula One, but when the opportunity came it was with one of their rivals.

Stroll joined Williams as a development driver at the end of 2015 and gained a place in their race team two years later. It was a fitting move as Canada’s last F1 driver, Jacques Villeneuve, won the world championship with them in 1997.

In the intervening period Stroll’s path through the junior categories attracted positive and negative attention.

The latter arose chiefly from the investment of his father Lawrence Stroll, a billionaire who made his wealth through fashion brands such as Polo Ralph Lauren, Tommy Hilfiger and Michael Kors. His earnings, which had previously gone into amassing an enviable collection of Ferrari road cars, were now ploughed into his son’s racing career.

After enjoying karting success in his homeland, Stroll relocated to Geneva in 2010. He joined the Ferrari Driver Academy as its ranks swelled to include Jules Bianchi, Sergio Perez, Brandon Maisano, Raffaele Marciello, Nicola Costa, Daniel Zampieri and Mirko Bortolotti, though the latter pair lost their places at the end of the year.

Stroll plunged into the European karting scene but ended his second year of KF3 21st in the standings while future F3 rival George Russell took the title. A trip to America for the SKUSA Supernational junior class event proved worthwhile, as he qualified on the front row and won.

For 2013 Stroll moved up to the KF class and took sixth in the world championship. Another future F1 racer, Max Verstappen came third, and the pair were about to make their move into full-fledged racing cars.

Stroll made his debut in the Ferrari-run Florida Winter Series which took place in January and February of 2014 and did not feature a championship points structure. He competed against the likes of Marciello and Verstappen, plus Antonio Fuoco and another Canadian racer, Nicholas Latifi. The latter pair took four wins each and Verstappen claimed two while Stroll never made it to the top step.

Not yet old enough to race in Formula Renault 2.0, for the European season Ferrari placed Stroll in Italy’s arm of the recently created FIA-sanctioned Formula Four championship. His father invested in the Prema team which ran him and placed experienced F3 racer Maisano in the other car for Stroll to learn from.

Maisano, 21, was too old to be eligible for the title, so while he placed well enough to out-score Stroll it was the 15-year-old who took the championship in dominant fashion. It was just as well he did, as Stroll injured a rib while karting late in the year which forced him out of the final round at Imola.

Once his injuries had healed Stroll was quickly into the cockpit of a Prema-run F3 car ready for his promotion to the European championship. Maisano accompanied him as Prema’s ranks were further bolstered by the arrival of 23-year-old F3 ace and Macau Grand Prix winner Felix Rosenqvist.

Stroll began 2015 in New Zealand winning the Toyota Racing Series alongside Maisano. However the pair parted company midway through 2015 when Maisano walked out of Prema during the Red Bull Ring race weekend after his form took a downward turn.

Stroll also went through a rough patch after his arrival in F3. By his own admission, following severaltop-six finishes he began to overstep the mark in his pursuit of a win. At Monza he tangled with Antonio Giovinazzi and was launched into a terrifying barrel-roll at Curva Grande. In a weekend of growing concern over driving standards in the championship the stewards ordered him to start the subsequent race from the pits. Stroll started from his grid position under appeal, but later withdrew the legal challenge and had to accept disqualification from the round.

Matters did not improve at Spa where Stroll triggered a three-car crash involving Rosenqvist and Mikkel Jensen while battling from the lead. This time the stewards barred him from taking part in the final race.

A chastened Stroll was more restrained over the remaining rounds. Although he tangled with Charles Leclerc at Zandvoort he was judged not to have been responsible. As Prema increasingly dominated the championship Rosenqvist took the title with ease. After that he handed Stroll his maiden F3 victory, waving his team mate through into the lead at Hockenheim. Stroll had turned his season around but not soon enough to stop fellow rookie Leclerc from finishing far ahead of him in the final standings.

Stroll rounded off the season with an appearance at the Macau Grand Prix where he took eighth while Rosenqvist won again. Soon afterwards the news of his surprise move from the Ferrari Driver Academy to Williams became public but Stroll had retained one vital element of continuity: FDA chief Luca Baldisserri left the team to mentor him.

Stroll began 2016 with his first appearance in a sports car, sharing a Ganassi-run Riley prototype with Alexander Wurz, Brendon Hartley and Andy Priaulx at the Daytona 24 Hours. They finished fifth.

But the European Formula Three championship was Stroll’s target. He began the year as favourite and not just because of his form in 2015. Prema’s rivals took note of their growing dominance and many deserted the championship. The 35-car field which assembled for the first race of 2015 fell to 21 the following year and reached a nadir of 17 at the Nurburgring, the weekend before Stroll collected the title.

Some of Stroll’s rivals viewed his success as an inevitability from the first race after Nick Cassidy, Maisano’s replacement, was passed by Stroll with an ease which suggested team orders. But subsequent races indicated the year was going to be anything but straightforward. Prema struggled at the resurfaced Hungaroring and though Stroll took pole position in the rain at Pau he stalled at the start and ended the weekend win-less.

His championship turned around at the Red Bull Ring. Stroll won in dominant fashion on a weekend where his rivals often fell foul of track limits. A somewhat fortunate victory came his way at the Norisring when recovering rival Calum Ilott tried to pass him for second but succeeded only in taking out race leader Joel Eriksson. As in Austria Stroll came away with two wins and a second place.

The Zandvoort weekend put a spanner in the works and raised questions over the depth of Stroll’s co-operation with Williams. He was stripped of two pole positions after a new suspension component fitted only to his car was found to have an aspect ratio greater than the maximum limit of 3.5:1. Some claimed the part had been developed by Williams. He came away point-less in the two races he started from the back, but won the other from third.

If removing the suspension part had any effect on his performance, it wasn’t noticeable. Stroll was never outside the top two in the remaining races and victory in the second race at Imola secured the title with four races to go. When the chequered flag came down for the final time in Hockenheim Stroll had won all of the last five races, 14 of the 30 held that year, and taken the championship with a 180-point margin over team mate Maximilian Gunther.

Williams appointed Stroll to their driver line-up in 2017. Valtteri Bottas was originally slated to be his team mate, but his late call-up to Mercedes meant Stroll would be partnered by Felipe Massa instead.

Stroll had a difficult start to the season, with three consecutive retirements at the start of the season, followed by three non-points finishes, running close to or at the back of the field. However, redemption came at his home race by scoring a ninth-place finish and his first F1 points in Montreal.

His rookie season peaked at the following race in Baku, where Stroll drove to what would turn out to be Williams’ last podium for a long time, becoming the second-youngest ever podium finisher in F1 with his third place. Four more points finishes in Italy, Singapore, Malaysia and Mexico saw him finish the year 12th in the world drivers’ championship, only one place and three points behind his much more experienced teammate.

Stroll remained at Williams for the 2018 season, as the team really began to struggle for performance. Improvements from some other midfield teams saw Williams’ chances of points fade severely.

Partnered with Sergey Sirotkin, Stroll severely outshone the rookie driver by scoring 85% of Williams’ points haul for the year – unfortunately, this still only amounted to six points for him and an 18th-place finish in the driver standings, ahead of only Brendon Hartley and his teammate.

Stroll’s billionaire father, Lawrence, had purchased Force India – subsequently rebranded as Racing Point – after the team was forced into administration midway through the 2018 season. As was expected, Stroll moved to drive for them the following season, alongside longstanding driver Sergio Perez.

The team’s year was one of recovery after budget issues had constrained development during the previous season and Stroll was not able to find the same performance in their car as Perez. He ended the season with less than half his teammate’s points haul (21 to Perez’ 52) but was presumed safe in his seat for the following season.

Stroll was once again alongside Perez for the heavily disrupted 2020 season. Despite controversies around the Racing Point car’s design and how closely it was based on the 2019 factory Mercedes, Stroll was able to enjoy his best season yet in Formula One.

Although incident and mechanical-failure induced retirements have marred his performance, he had a run of seven points finishes from the Styrian to Italian Grand Prix, culminating in a second career podium with a third-place finish at Monza.

Stroll has been confirmed to drive alongside Sebastian Vettel at the team in 2021, as they rebrand to Aston Martin.