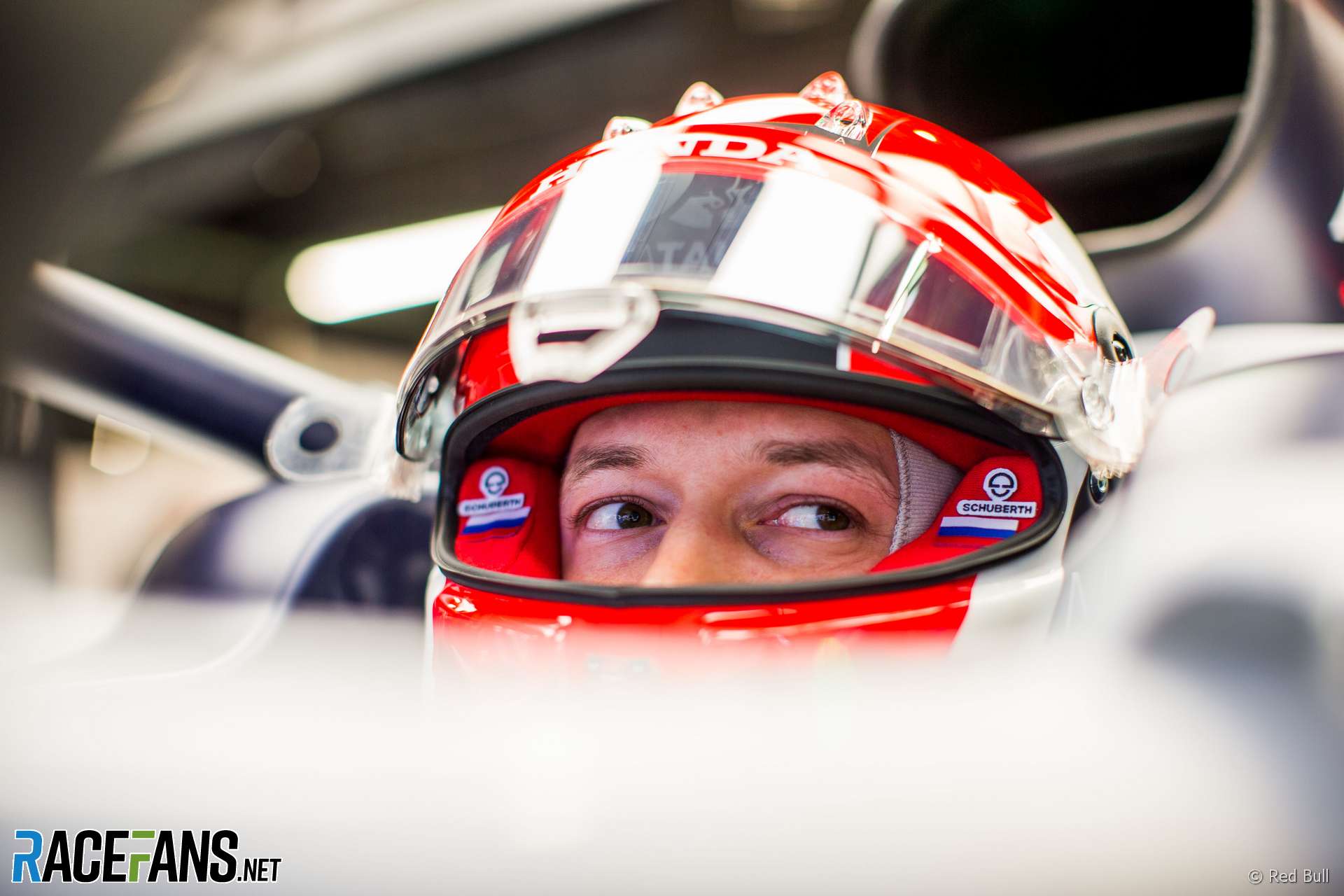 The Russian driver made his way to Formula One as part of Red Bull’s Young Driver Programme. He was chosen ahead of fellow Red Bull junior drivers Antonio Felix da Costa and Carlos Sainz Jnr to get the chance.

Toro Rosso had given Kvyat his first run in an F1 car at the Silverstone Young Drivers’ Test in July 2013. Just three months later he was confirmed as Daniel Ricciardo’s replacement for the following season. That made Kvyat the second Russian driver to gain a place in F1 following Vitaly Petrov’s lead.

Kvyat was born in Ufa, 1,000km east of the Russian capital Moscow. He began karting at the age of eight and by 2010 he’d made the transition to car racing, competing in Formula BMW championships.

Following a stint in New Zealand’s Toyota Racing Series he returned to Europe to compete in Formula Renault 2.0. He ended a successful debut season in the category second in the Northern European Cup, behind Sainz Jnr, and also placed third in the Eurocup series.

In 2012 he claimed the Formula Renault 2.0 ALPS title following a controversial final-round clash with Norman Nato. Kvyat went into the final race at the Circuit de Catalunya three points ahead in the championship, but when Nato tried to pass him for the lead on lap three the pair collided and retired, handing Kvyat the title.

The Eurocup championship was also settled in a final-round decider at the Circuit de Catalunya, but this time Kvyat missed out. This was despite title rival Stoffel Vandoorne retiring early on, leaving Kvyat needing only to convert his pole position start into a podium finish to claim the crown.

However Kvyat was handed a drive-through penalty for changing his tyres too late on the grid before the race started as the field hedged their bets on a damp track. Worse, the wet weather tyres he had changed to proved unsuitable as the track dried and he fell to eighth at the chequered flag. Although Kvyat had scored seven wins to his rival’s four, the more consistent Vandoorne prevailed by ten points.

For 2013 the Red Bull-backed driver conducted a dual campaign in the F1-supporting GP3 series and as a guest driver in the European Formula Three championship, in which he was ineligible for points.

After being confirmed as Toro Rosso’s new driver Kvyat won the GP3 title in the next race in Abu Dhabi, beating rival Facu Ragalia with one race to spare.

Kvyat also made a successful debut in European F3, taking a podium finish in his first weekend at Hockenheim. He returned to take three pole positions and three second place finishes at the Red Bull Ring, then scored a victory at Zandvoort, one of only two races that year won by a Volkswagen-powered driver. Kvyat acquitted himself well with his promotion to F1 and had already earned a continued stay at Toro Rosso when the opportunity for further advancement arose. When Sebastian Vettel decided to leave Red Bull for Ferrari, Kvyat was promoted in place of the world champion, and instead of his more experienced team mate Jean-Eric Vergne.

Although Vergne scored more points during the course of the season, Kvyat’s qualifying record was better. And both drivers suffered from the chronic unreliability of the STR9 and, in particular, the Renault power unit.

Nonetheless Kvyat scored points on his debut in Australia, becoming the youngest driver ever to do so at the time, and reached Q3 on his first visit to Monaco.

Extra attention surrounded him when F1 made its first visit to Russia and Kvyat delivered with his best qualifying performance yet, lining up fifth. However in the race both drivers struggled with their tyres.

However by then it had already become known that he would be returning in an even more competitive car next year.

Kvyat out-scored new team mate Daniel Ricciardo over the course of their first season together as team mates at Red Bull, though he enjoyed the rub of the green at times, particularly when the team had its highest-scoring finishes at Monaco and Hungary.

The team had a frustrating start to the season and if matters improved at all over the coming months they did so only very slowly. Kvyat failed to start the first race of the year in Australia due to a gearbox problem, and five races in he was yet to improve on his highest finish from the Toro Rosso days.

That changed in Monaco where he lined up behind Ricciardo on the grid but got around his delayed team mate at the first corner and went on to take fourth. He followed it up with sixth at Silverstone – a result which might have been better had he not spun during the wet part of the race.

His best race of the year came at Hungary – second behind Vettel’s Ferrari. By his own admission it was a generous reward for one of his less impressive drives, but the counterpoint to that came in Singapore where two Safety Car appearances confined him to sixth. But it had been a solid first year with a top team, and Kvyat’s services were duly retained.

They were not retained for very long. Kvyat got his season off to a bad start when he struggled with the short-lived elimination qualifying format, producing sub-par results on the two occasions it was used.

Matters improved in China where he reached the podium. But it didn’t escape Red Bull’s notice that team mate Ricciardo had qualified on the front row and been leading until he suffered a puncture. Then came Russia.

Kvyat’s home race was a nightmare. Heading into the first braking zone on lap one lap he clattered into Vettel, triggering a multi-car accident which also spoiled the races of Ricciardo and Red Bull stablemate Sainz. Kvyat thne finished Vettel’s race off by dumping him into a barrier at turn four. A few days after the race came the stunning news from Red Bull’s Helmut Marko: Kvyat was being demoted to Toro Rosso and Max Verstappen promoted in his place.

This was tough on Kvyat: as well as taking a blow to his self-esteem he was now lumbered with a much less competitive car and a spirited team mate who had been driving it all season and proceeded to run rings around him. Nonetheless Red Bull showed some continued faith in Kvyat, keeping him at Toro Rosso for 2017.

Kvyat’s troubled return to Toro Rosso continued. Sainz consistently out-scored him and six races before the end of the season Kvyat was dropped. Rookie driver Pierre Gasly was brought in to replace him, though Toro Rosso stressed Kvyat would remain part of Red Bull. He spent 2018 working as Ferrari’s simulator driver.

The team made good on the claim at the end of 2018 when Toro Rosso changed its driver line-up again. Gasly was promoted to Red Bull, and Brendon Hartley lost his drive. New driver Alexander Albon was hired, and to complement the rookie Kvyat’s was rehired. However at mid-season when Red Bull decided to replace Gasly, it was Albon they called up instead of Kvyat, despite him having scored Toro Rosso’s first podium for 11 years at the Hockenheimring.

Nonetheless Kvyat was retained for another season in 2020, when Toro Rosso rebranded as AlphaTauri.