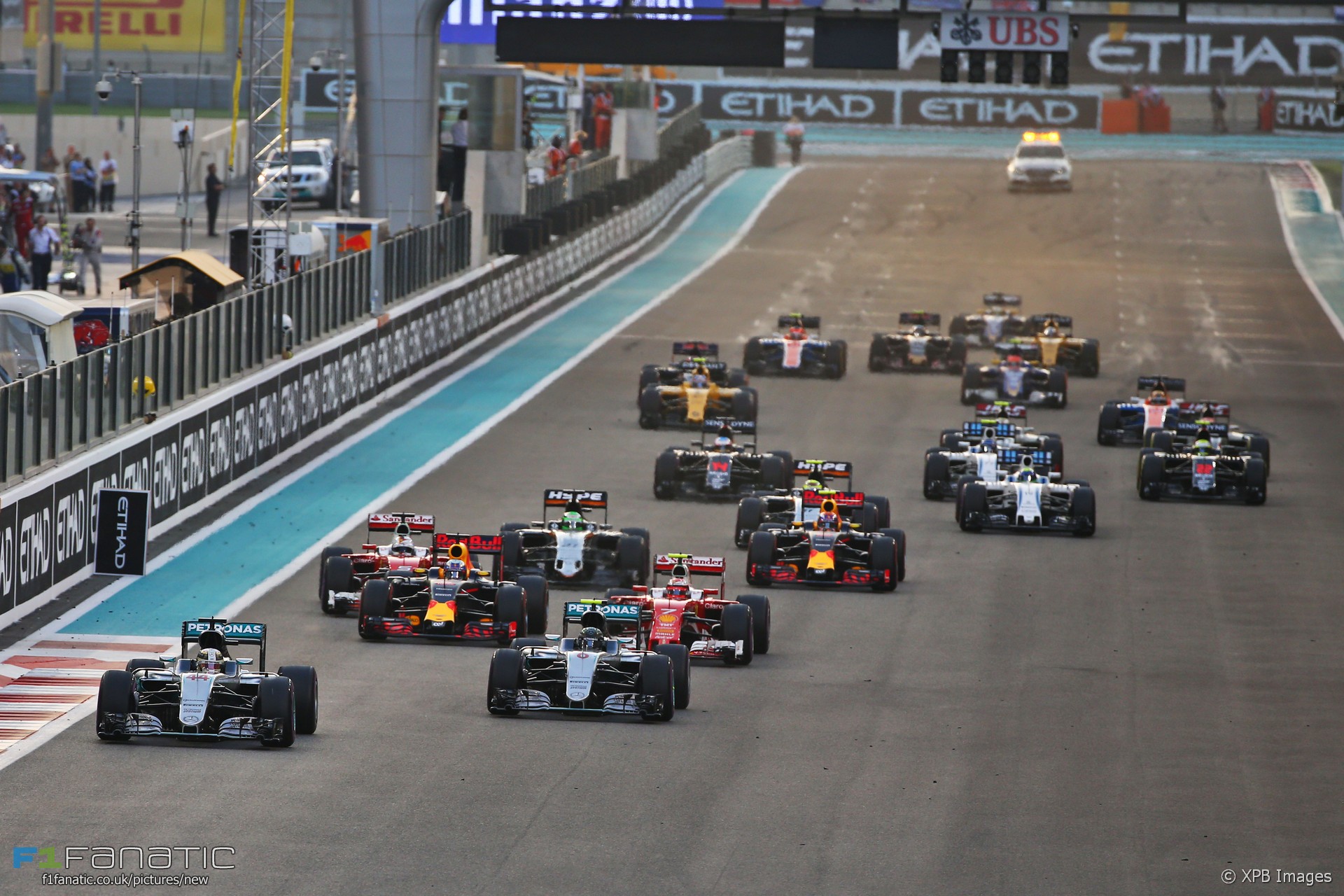 It was a strange race for the front-runners in Abu Dhabi but a more typical affair further back. Here’s how the drivers got on in the final race weekend of the year.

Lewis Hamilton – Started on the right foot by leading Rosberg in both Friday sessions, despite a brief spin in first practice. He was imperious in qualifying, setting a pace Rosberg simply couldn’t match. Delaying Rosberg was obviously the correct tactics; the argument he should have driven off and left things alone behind him is unrealistic. So why didn’t it work? Hamilton said slowing Rosberg down any more would have been dangerous, but it appeared he was too cautious about preserving his own position to really jeopardise Rosberg’s. He needed to to push things to the limit, putting himself at risk of being overtaken, and it seemed he couldn’t bring himself to do that.

Nico Rosberg – Couldn’t keep up with Hamilton in qualifying but the chasing pack was half a second slower. Hamilton took care of that in the race, of course, which made for a very uncomfortable 55 laps for Rosberg. However at key moments he did what he needed to: he was quick enough on his first out-lap to keep Raikkonen behind, fought superbly to pass Verstappen, and kept his cool at the end. Slower than Hamilton, but deeply impressive under pressure.

Sebastian Vettel – Was ‘best of the rest’ on Friday but a gearbox problem struck during his race simulation. He was distracted by an error from Verstappen ahead of him during his final qualifying run and ended up fifth. However he ran a long middle stint before switching to super-softs at the end of the race to take advantage of the slow pace dictated by Hamilton. This paid off, allowing him to pass the Red Bulls for third. But he couldn’t find a way past Rosberg, ironically because the Mercedes driver was occasionally getting DRS activation from his team mate.

Kimi Raikkonen – Didn’t look particularly comfortable with the car on Friday but recovered to take fourth on the grid. He picked off Ricciardo at the start and ran third, but despite having the advantage of the undercut against Rosberg he failed to jump the Mercedes. Ricciardo got him at the next round of stops, and after letting Vettel through he fell off the back of the leading pack.

Felipe Massa – The Force Indias separated him from his team mate at the end of his final Friday in F1, but he beat his team mate to take a place in Q3. Bottas passed him early in the race, then retired, leaving Massa to collect points for ninth. He ended his F1 career in fighting style, trying to find a way past Perez while simultaneously fending off Alonso.

Valtteri Bottas – After conducting engine and aero tests in first practice he got down to business in the second session and was quicker than both Force Indias. He couldn’t get more grip from the ultra-softs in qualifying and so went out in Q2. His race was a bit of a non-event: having made a good start a rear suspension failure ended his day.

Daniel Ricciardo – There was little to choose between the Red Bulls on Friday – Ricciardo was just one-thousandth off Verstappen – but the gap to Mercedes was a greater concern for the team. Verstappen led much of qualifying but Ricciardo pulled a great lap out of the bag at the end to take ‘non-Mercedes pole’. He couldn’t hold his position at the start on super-softs, however, and despite a strong effort he failed to pass Raikkonen on the track. The team arguably slipped up by leaving him out while several of his rivals were stuck behind Verstappen. Sticking with the two-stopper limited his points-scoring opportunities to fifth place.

Max Verstappen – Had to abort his last race simulation run in second practice due to a problem with his car. He was frustrated with himself after errors in Q3 left him sixth on the grid, then made another mistake at the beginning of the race and fell to last. However thanks to Hamilton’s slow driving Verstappen was able to catch up and converting to a one-stop strategy recovered fourth place which rather flattered his efforts.

Nico Hulkenberg – Alfonso Celis drove his car in first practice but Hulkenberg was on the pace by qualifying and narrowly beat his team mate to lead row four. He went around the outside of Verstappen at the start and survived the contact between the pair, then won a thrilling scrap with Perez to keep his place. Hamilton’s pace wasn’t slow enough for Force India to catch up, so seventh was the limit of what could be done.

Sergio Perez – A slight power loss was his only concern on Friday and Hulkenberg pipped him by 0.018 seconds in qualifying. Having been rebuffed by Hulkenberg at the start he settled into eighth place but lost pace at the end of the race and came under pressure from Massa.

Go ad-free for just £1 per month

Kevin Magnussen – Trailled Palmer in both Friday sessions after a water leak curtailed his running in the first and a flat-spot spoiled his soft tyre race simulation. In qualifying his plan to do three runs was interrupted by a trip to the weighbridge and he ended up behind Palmer again. He got off the line poorly and was almost last at turn one, and tangled with Wehrlein at turn eight. He pitted for repairs but had to retire soon afterwards.

Jolyon Palmer – Tyre degradation on high fuel was his concern on Friday evening but the following day he was pleased with his work, gaining a place in Q2. His race started well and he quickly rose to 11th, raising hopes of a points finish. But tyre degradation remained a significant problem and he began to lose ground, then ran into the back of Sainz, picking up a penalty.

Daniil Kvyat – Matters came to a head over Toro Rosso’s spate of recent punctures on Friday. Two further left-rear failures for Kvyat, culminating in a high-speed spin during the second session, led the team to park its cars while the cause was investigated. A brake duct was eventually found to be the culprit. The drivers therefore had to improvise in qualifying and Kvyat did best, though he couldn’t progress beyond Q1. Having moved up to 13th early on he retired with gearbox failure on a wasted weekend.

Carlos Sainz Jnr – Did little running in the more representative second practice session due to Kvyat’s punctures. Having started from the back row he got rid of his super-soft tyres early on and made some progress. An early second pit stop dropped him behind Palmer and shortly after passing the Renault he was rammed from behind, causing race-ending gearbox damage.

Marcus Ericsson – Both Saubers were behind the Manors on Friday and Ericsson admitted they were having difficulty getting the ultra-softs to work. An error on his final lap left him last on the grid. After being forced wide by Magnussen at the start a mammoth, 38-lap stint on soft tyres saw him rise to 11th. But he inevitably began to lose ground and though his eventual pit stop did get him ahead of his team mate there was only one other car behind them at the flag.

Felipe Nasr – Felt his car handled better in the heat of first practice which was not ideal with the competitive action taking place later in the day. A power unit surge during his qualifying lap confined him 19th. In the race he fell to the back after tangling with Ocon, and only finished in front of Palmer.

Fernando Alonso – After spending first practice working on McLaren’s 2017 developments Alonso put his car 11th-quickest in the second session. He went two better on Saturday, crediting the improvement to some bold set-up calls. With no cars retiring in front of him, and Massa’s Williams much quicker in a straight line, tenth was probably the best he could do. But a Vettel-esque final stint on super-softs meant he was pressuring Perez and Massa as the race ended.

Jenson Button – A power unit glitch forced an early halt to his running in first practice and delayed his start to the second session while the unit was replaced. In qualifying he found himself needing ever more front downforce but ran out of wing angle and dropped out in Q2, complaining of the inevitable understeer. His race ended early after he clouted a kerb and his suspension broke.

Pascal Wehrlein – Admitted Yas Marina had “too many corners” for the Manor and found his set-up tweaks after first practice did not work as hoped in the second session. He was upbeat about the track, however, and snagged a place in Q2 at the expense of the Toro Rossos. But he made a sluggish start and tangled with Magnussen, dropping to the tail of the field. A slow pit stop compounded his problems but he still managed to finish in front of the Saubers.

Esteban Ocon – After sitting out first practice so Jordan King could drive Ocon pipped Wehrlein to the team’s quickest time. But in qualifying he was another driver who was stumped by the ultra-softs, unable to find more time from them. “I was standing still and my team mate and everyone else was improving,” he lamented. The race went better as he moved up to 11th at one stage but contact with Nasr damaged his front wing. Given Manor’s championship situation the move was a risk worth taking.

Romain Grosjean – Friday was the usual blur of disgruntled radio messages and spins. A water pressure problem eventually forced him into the pits. The race went better – “there were some laps where my pace was amazing” – and he climbed to 11th place.

Esteban Gutierrez – Enjoyed a smoother Friday than Grosjean as was fractionally quicker, a performance he replicated in qualifying. However he was passed by his team mate in the race and finished there.

Vote for your driver of the weekend

Which driver do you think did the best job throughout the race weekend?

Who got the most out of their car in qualifying and the race? Who put their team mate in the shade?