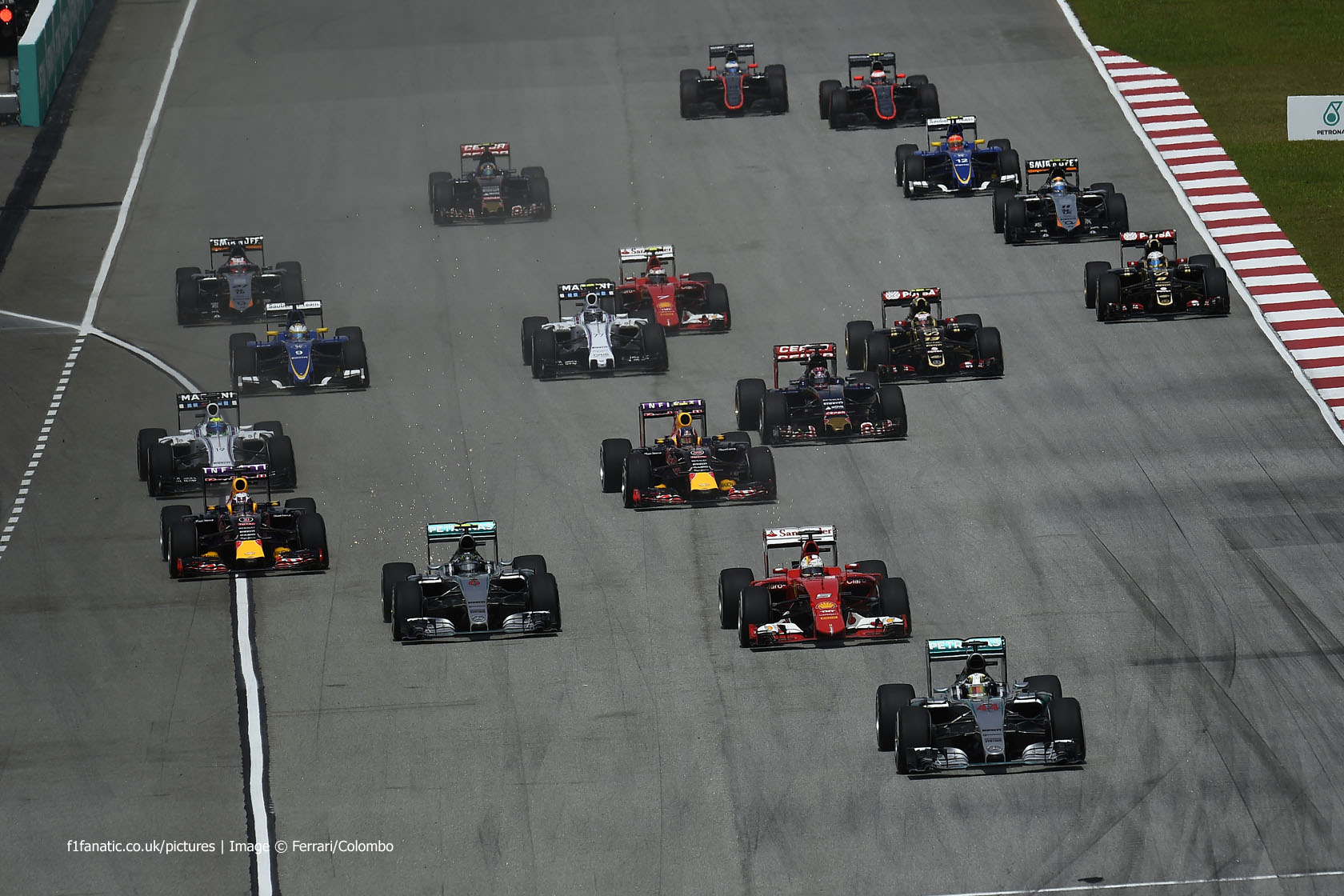 Late changes to qualifying, complicated new tyre rules and tight radio restrictions are just a few of the changes to the regulations drivers and teams face in 2016.

Here are all the significant changes to the sporting regulations for the new season.

The FIA published F1’s new qualifying rules just eight days before the cars will be on track to decide pole position for the season-opening race.

The major change to the arrangement is that the slowest driver will be now eliminated every 90 seconds during each of the three phases rather than all at once.

If the slowest driver is on a lap when the elimination happens they will have to return to the pits without completing it. However at the end of each session all drivers will be allowed to complete their final lap before the last car is eliminated.

The grid will be arranged as before. Note that there are 22 cars entered for this year’s championship instead of 20 last year.

The second major change to the sporting rules for 2016 is intended to give drivers and teams greater freedom of choice over their tyre selections for each race.

F1’s official tyre supplier now nominates three dry-weather tyre compounds for each race instead of two. As before each driver gets 13 sets of slicks and must hand back a certain number of these prior to qualifying. But whereas this entire selection was previously specified by Pirelli, now only two of them are and each driver can choose the remaining eleven.

There are further restrictions on those choices, however. Pirelli has to nominate up to two tyre compounds of which every driver must have at least one set of available for the race. Every driver must use at least one of these sets during the race, plus another set of a different compound.

A change to the rules for 2016 approved an increase in the total number of races from 20 to 21. This in turn triggered a clause granting teams an extra power unit on top of the original allocation of four. Each driver may now used five during the season and will incur penalties as before if they use six or more components.

The rules on engine homologation have been extensively rewritten. The most significant change is that where previously each manufacture could “homologate no more than one specification of power unit”, that rule has now been revised.

It now states “any manufacturer who homologated a power unit during the 2014-2020 period may also apply to the FIA to re-use such a power unit in a given team, to the same specification, and without going through the re-homologation process”. This allows teams like Ferrari to supply year-old power units to Toro Rosso.

Following complaints about drivers abusing track limits a slight reworking of the regulations now states they “must make every reasonable effort to use the track at all times”.

Any driver who causes an aborted start now has to begin the race from the pit lane under this new rule for 2016:

If another problem arises which does not necessitate a delay to the start […] drivers will be asked to carry out an extra formation lap […]. Any driver who caused the start to be aborted, and is then able to start the extra formation lap must enter the pit lane at the end of the lap and start the race as specified in Article 36.2. A penalty under Article 38.3(d) will be imposed on any driver who fails to start the race from the pit lane.

In order to establish whether a car has been released safely from its pit box, teams must now make it possible to tell when the car was released when it is viewed from above:

The competitor must also provide a means of clearly establishing, when being viewed from both above and in the front of the car, when that car was released.
2016 rule

The competitor must also provide a means of clearly establishing, when being viewed from the front of the car, when that car was released.
2015 rule

The rules on when a driver may pass another car under Safety Car conditions have been clarified:

Overtaking behind the safety car is only permitted in the following cases:

a) Any driver who is delayed when leaving his position in the fast lane may overtake to re-establish his original starting position provided he does so before he crosses the first safety car line. Should he fail to do so he must re-enter the pit lane and may only re-join the race once the whole field has passed the pit exit.

A penalty under Article 38.3(d) will be imposed on any driver who fails to re-enter the pit lane if he has not re-established the original starting order before he reaches the first safety car line.

b) Drivers may leave the fast lane in order to overtake any car delayed when leaving its position in the fast lane.

Any driver whose car has been pushed from the fast lane, in accordance with Article 42.4 above, may not overtake in order to re-establish the order before the race was suspended.
2016 rule

Overtaking behind the safety car is only permitted if a car is delayed when leaving its position in the fast lane and cars behind cannot avoid passing it without unduly delaying the remainder of the field.

Drivers may only overtake to re-establish the order before the race was suspended.

Any driver delayed in this way, and who is unable to re-establish the original starting order before he reaches the first safety car line, must re-enter the pit lane and may only re-join the race once the whole field has passed the end of the pit lane.

A penalty under Article 16.3(d) will be imposed on any driver who fails to enter the pit lane if he has not re-established the original starting order before he reaches the first safety car line.
2015 rule

The curfew period during race weekends have been increased to eight hours’ duration instead of seven.

The mandatory July/August factory shutdown may now be reduced from 14 days to 13 if the gap between consecutive races falls to 17 days. That is not the case this year, but it leaves the door open for the traditional summer shutdown to be compressed.

The FIA may arrange up to six two-day tests during the season “for the sole purpose of providing the supplier with the chance to test improvements to the design of their tyres”.

An addition to the testing restrictions now prevents teams from running cars of 2012 to 2017 specification on behalf of “a supplier of a homologated power unit”. The FIA’s “prior authorisation” is now required for competitors to sell or make available such cars.

Cars used for testing must now conform to the relevant technical regulations relating to cockpit construction and safety equipment.

The Virtual Safety Car can now be used during practice sessions (which includes qualifying) as well in during races.

Drivers have also been given an additional piece of safety equipment:

For the purpose of accident analysis, each driver must wear in-ear accelerometers which have been manufactured by the FIA designated supplier to a specification determined by the FIA. These should be worn by the driver during each event and all tests which are attended by more than one team, teams must use their best endeavours to ensure that they are in working order at all times.

Potentially one of the most significant regulatory changes for the coming season does not feature at all in the rule book. The FIA issued a directive last year indicating they intend to pursue a much more rigorous interpretation of article 27.1 of the Sporting Regulations which is as follows:

The driver must drive the car alone and unaided.

The FIA will do this by forbidding all radio communications to drivers other than the following:

1. Indication of a critical problem with the car, e.g. puncture warning or damage.*
2. Indication of a problem with a competitor’s car.*
3. Instruction to enter the pit lane in order to fix or retire the car.*
4. Marshalling information (yellow flag, red flag, race start aborted or other similar instructions or information from race control).*
5. Wet track, oil or debris in certain corners.*
6. Instructions to swap position with other drivers.*

*These are the only messages that may be passed to the driver, whilst he is in the car and on the track, from the time the car leaves the garage for the first time after the pit lane is open on the day of the race until the start of the race

7. Acknowledgement that a driver message has been heard.
8. Lap or sector time detail.
9. Lap time detail of a competitor.
10. Gaps to a competitor during a practice session or race.
11. “Push hard”, “push now”, “you will be racing xx” or similar.
12. Helping with warning of traffic during a practice session or race.
13. Giving the gaps between cars in qualifying so as to better position the car for a clear lap.
14. Tyre choice at the next pit stop.
15. Number of laps a competitor has done on a set of tyres during a race.
16. Tyre specification of a competitor.
17. Information concerning a competitor’s likely race strategy.
18. Safety Car window.
19. Driving breaches by team driver or competitor, e.g. missing chicanes, running off track, time penalty will be applied etc.
20. Notification that DRS is enabled or disabled.
21. Dealing with a DRS system failure.
22. Change of front wing position at the next pit stop.
23. Oil transfer.
24. When to enter the pits.
25. Reminders to check for white lines, bollards, weighbridge lights when entering or leaving the pits.
26. Reminders about track limits.
27. Passing on messages from race control.
28. Information concerning damage to the car.
29. Number of laps remaining.
30. Test sequence information during practice sessions, e.g. aero-mapping.
31. Weather information.