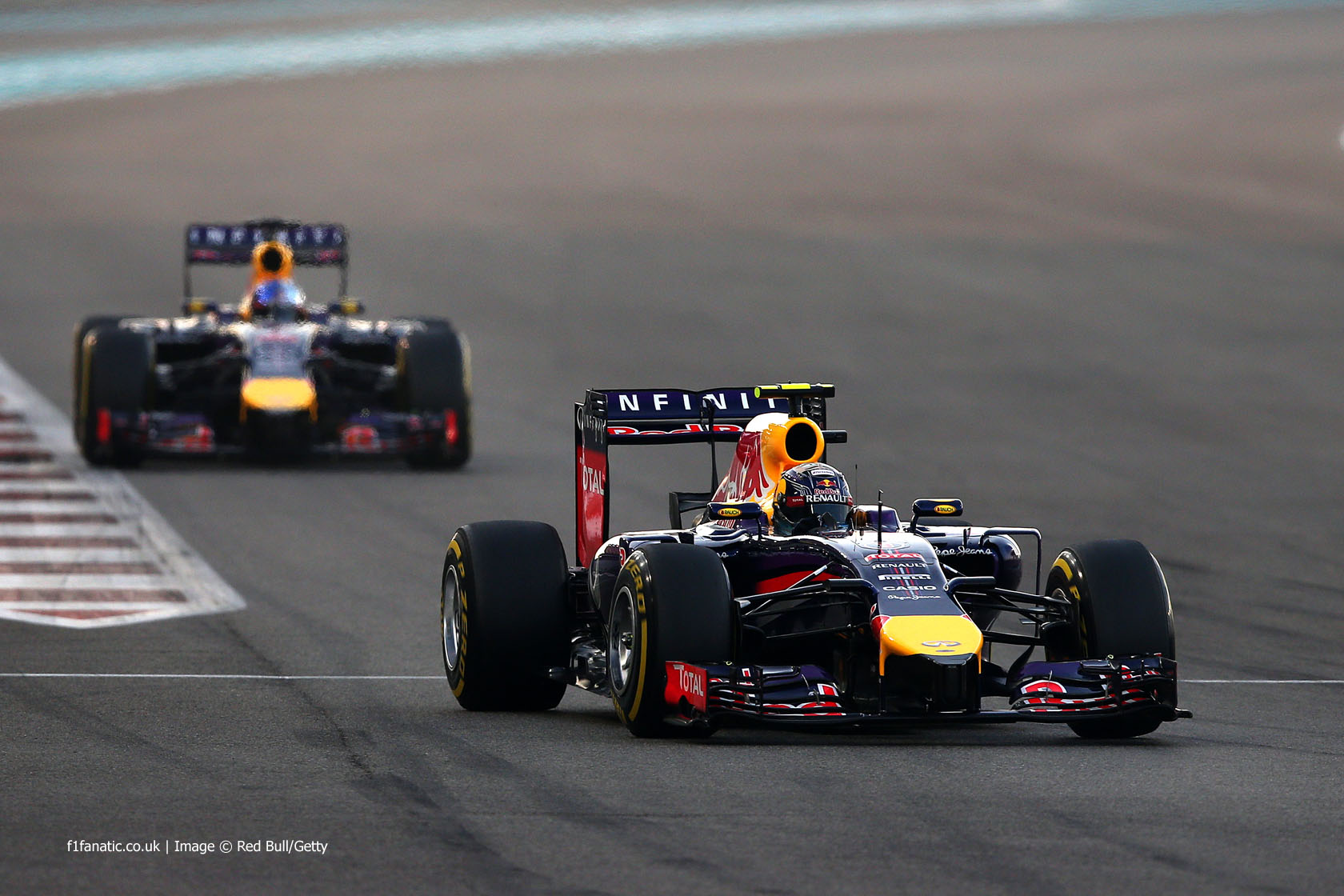 Eight different drivers won F1 Fanatic’s Driver of the Weekend polls during the 2014 season, but world champion Lewis Hamilton came out on top.

Hamilton was voted Driver of the Weekend on six separate occasions, twice as many times as any other driver. Daniel Ricciardo came top of the poll three times including for two of his three wins plus his drive from the pits to fourth place in the Abu Dhabi season finale.

Valtteri Bottas was also a three-times winner in the poll, coming on top in three consecutive races in the middle of the season. They included his run from 14th on the grid to finish runner-up to Hamilton in the British Grand Prix.

The only other driver to win the vote more than once was Fernando Alonso, who did so on the two occasions he got the Ferrari to the podium.

Of the four one-off poll winners, Jules Bianchi took the most emphatic win of the season, earning over 60% of the vote after claiming Marussia’s first ever points in Monaco. Like Sergio Perez before him, Kevin Magnussen won the poll in his first ever F1 race in Australia, after claiming second place for McLaren.

2014 Driver of the Weekend results

NB. No Driver of the Weekend for the Japanese Grand Prix Ricciardo won the final Driver of the Weekend vote of the season after overcoming a significant pre-race setback.

He and team mate Vettel were thrown out of qualifying on a technicality, but having started from the pits Ricciardo took the chequered flag in fourth place. Vettel was four places and nearly 35 seconds behind Ricciardo after their last race as team mates.

Race winner and new world champion Hamilton was voted second in the poll after a relatively straightforward race and run to the title that became even easier when his team mate was taken out of contention with a technical fault.

Felipe Massa was voted third in the pole after proving to easily be Hamilton’s closest competition following Rosberg’s demise. The vote marks only Massa’s second appearance in the poll, both of which were in third place and in the final two races of the season.

Ricciardo qualified the best he could in his Red Bull – fifth behind the two Mercedes’ and Williams’ cars – only to be thrown to the back of the grid as his team finally succumbed to the threat of a penalty for flexing front wings.

Red Bull decided to start both cars from the pit lane and – despite an engine disadvantage – both cars flew through the field, until they hit the barrier that was Magnussen’s McLaren.

Vettel got stuck and moved no further, but Ricciardo managed to slip through with a pivotal move – although quite how still remains a mystery as it was missed by the television director.

Overtaking Magnussen was certainly the most significant move of Ricciardo’s race, but by no means his only one. He put in a series of impressive overtakes on his way to fourth having started in the pits, summing up just how mighty his season has been.

Seven tenths ahead of Vettel in qualifying is a huge margin and again owning him in the race, passing Magnussen whereas Vettel couldn’t and hence we got the end result in the race. Pretty much dominant throughout the year against his four-times champion team mate. He is my driver of the season as well.
@Mjf1fan

My driver of the weekend is Ricciardo, as has become usual this season he outperformed his multiple world champion team mate in qualifying and the race. It will be interesting to see if he can keep the same standard in future with higher expectations when he has to lead the team and fight for the championship.
@Pja

I voted for Ricciardo. He qualified ahead of his team mate Vettel, but was sent to the back along with Vettel through no fault of their own due to Red Bull’s idiotic cheating. Ricciardo had some great battles, especially with Vergne, and came back from the pit lane to fourth.
@Ultimateuzair Issues and errors in qualifying have been a trademark of Hamilton’s season, and despite leading Q1 and Q2 in Abu Dhabi, he once again missed out on pole position by nearly four tenths of a second.

He more than made up for it in his start though, rocketing off the line so quickly he may well have taken the lead had he started on the third row.

He kept Rosberg at arm’s length until his team mate hit trouble and was then eager to reduce his own pace to avoid the same fate. Nonetheless he brought the car home for his eleventh win of the season and his second world championship.

Once more, Hamilton’s qualifying wasn’t too brilliant, but his race was close to perfection. He stormed off the line in an irresistible manner, and Rosberg didn’t even try to impede him, such was his momentum.

After that, he managed the pace very maturely, only pushing as much as he needed to, because he didn’t want to run into technical problems. He is definitely a lot more mature than back in 2008 and in his annus horribilis in 2011. He deserves this race win and the championship as well.
@Nase

Hamilton was under the most pressure going into this race. Hamilton handled this well with a fast faultless drive. He won the race and championship with style.
@Edw4 Having looked like they may shock with another pole position, the Williams pair of Bottas and Massa could only manage to lock out the second row.

Lining up behind the fast-starting Hamilton, Massa also made a quick getaway, easing past the slow-starting Bottas and nearly challenging Rosberg.

He kept within striking distance of the two Mercedes cars and was perfectly placed to take second when Rosberg hit problems. A late switch to super softs enabled him to close the gap to Hamilton but a lack of grip and laps towards the end meant he had to settle for second, although it was still his best finish of the season.

I went with Felipe Massa. I’ve written him off so many times and watching his performance this weekend I really have to take my hat off to him.

While he didn’t out-qualify his team mate, I rate his team mate much higher than him, but from the start onwards Massa looked a lot more in control of his race than Bottas and ultimately had a very nice 2nd place. I’ve been wanting Massa to prove me wrong about him since 2012 and I feel that last weekend, he did. Now to keep this kind of (relative) performance up.
@Npf1