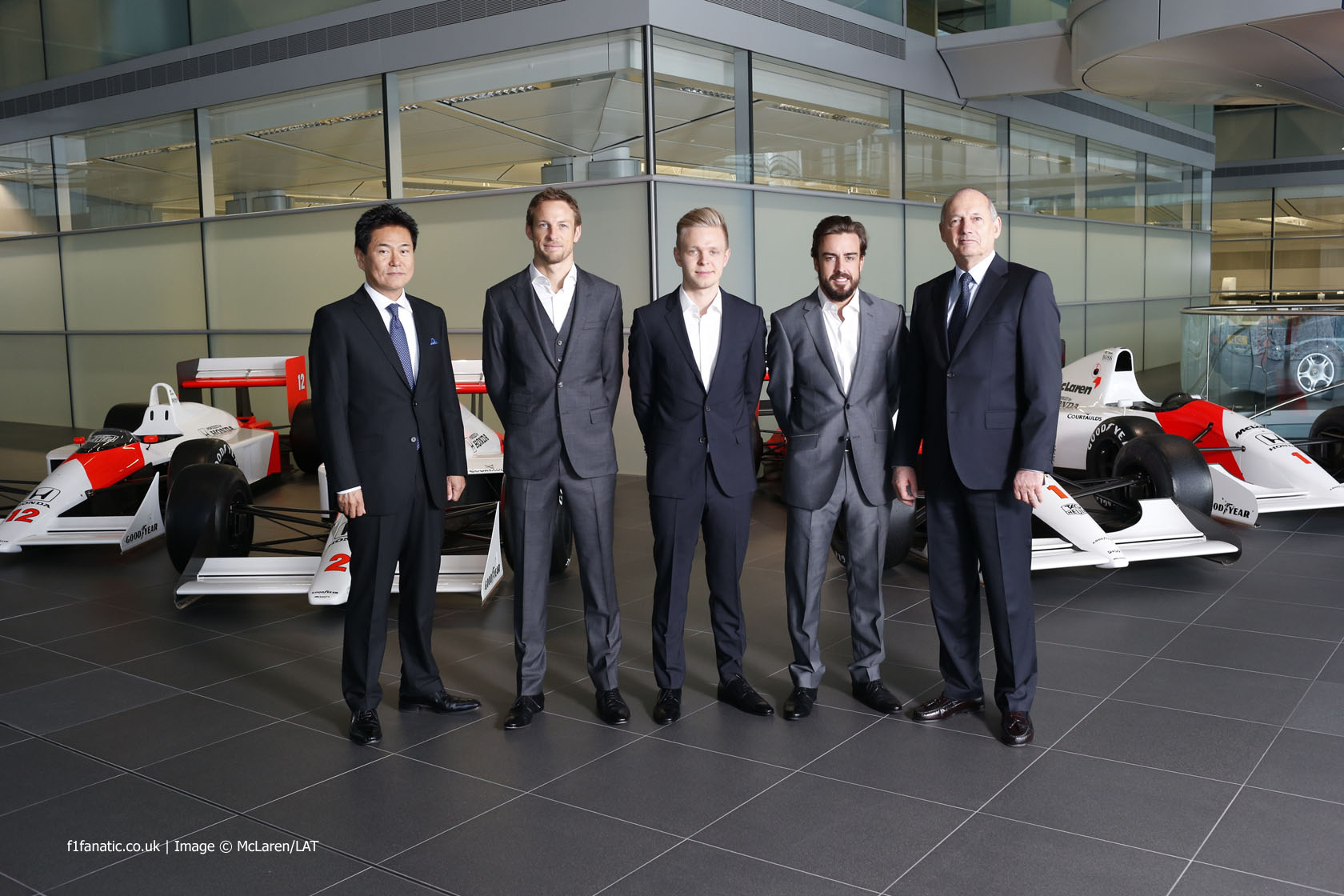 Fernando Alonso’s return to McLaren for next year’s championship has been officially announced by the team.

Alonso split from McLaren after a single, acrimonious season in 2007. He is rejoining them in time for the return of engine supplier Honda in 2015.

McLaren also confirmed Jenson Button will remain at the team for a sixth season, despite recent speculation he would lose his seat.

The news means Kevin Magnussen has lost his place in the team’s race line-up after just one season. However McLaren said he will “remain an important part of the team, as test and reserve driver”.

Alonso said the discussion for him to return to McLaren began over a year ago. “Over the past year I have received several offers, some of them really tempting, given the current performance of some of the teams that showed interest,” he said.

“But, more than a year ago, McLaren-Honda contacted me and asked me to take part, in a very active way, in the return of their partnership – a partnership that dominated the Formula One scene for so long.”

Alonso added he is excited to be following the footsteps of Ayrton Senna, who won all three of his world championships in a McLaren-Honda.

“I have never hidden my deep admiration for Ayrton Senna, my favourite driver, my idol on track, my reference,” he said.

“I still remember, as a kid, the posters in my wardrobe, my toy cars in which I dreamed I would one day emulate Ayrton, and the kart that my father built for my older sister, and that I ended up falling in love with.

“That kart had the livery of one of the most legendary partnerships in the history of Formula One, McLaren-Honda, the car that Ayrton drove, the same partnership to which I am now honoured to join, to take part in the next Formula One world championship.”

McLaren will therefore join Ferrari in having world champions in both their cars next year. “As regards drivers, McLaren’s policy has always been to assemble the strongest line-up possible,” said Ron Dennis, “and in Fernando and Jenson I firmly believe that is exactly what we have.”

“I can safely say that we now have by an order of magnitude the best driver line-up of any current Formula One team,” Dennis added.

Button, who drove with Honda power between 2003 and 2008, also acknowledged the heritage of McLaren-Honda as his continuation with the team was confirmed.

“I admired Ayrton Senna enormously, but, for me, it was the exploits of his McLaren-Honda team mate Alain Prost that inspired me most as a boy,” said Button.

“The way he stroked those beautifully brutal red-and-white cars to grand prix wins and world championships was to my mind poetry in motion, and I have tried to emulate his driving style ever since.”

All of the nine teams which are expected to compete in F1 next year have now announced their driver line-ups. It remains to be seen whether Caterham and Marussia, both of which have gone into administration, will appear in next year’s championship.

View the complete list of 2015 F1 drivers and teams

156 comments on “McLaren confirm Alonso and Button as 2015 drivers”