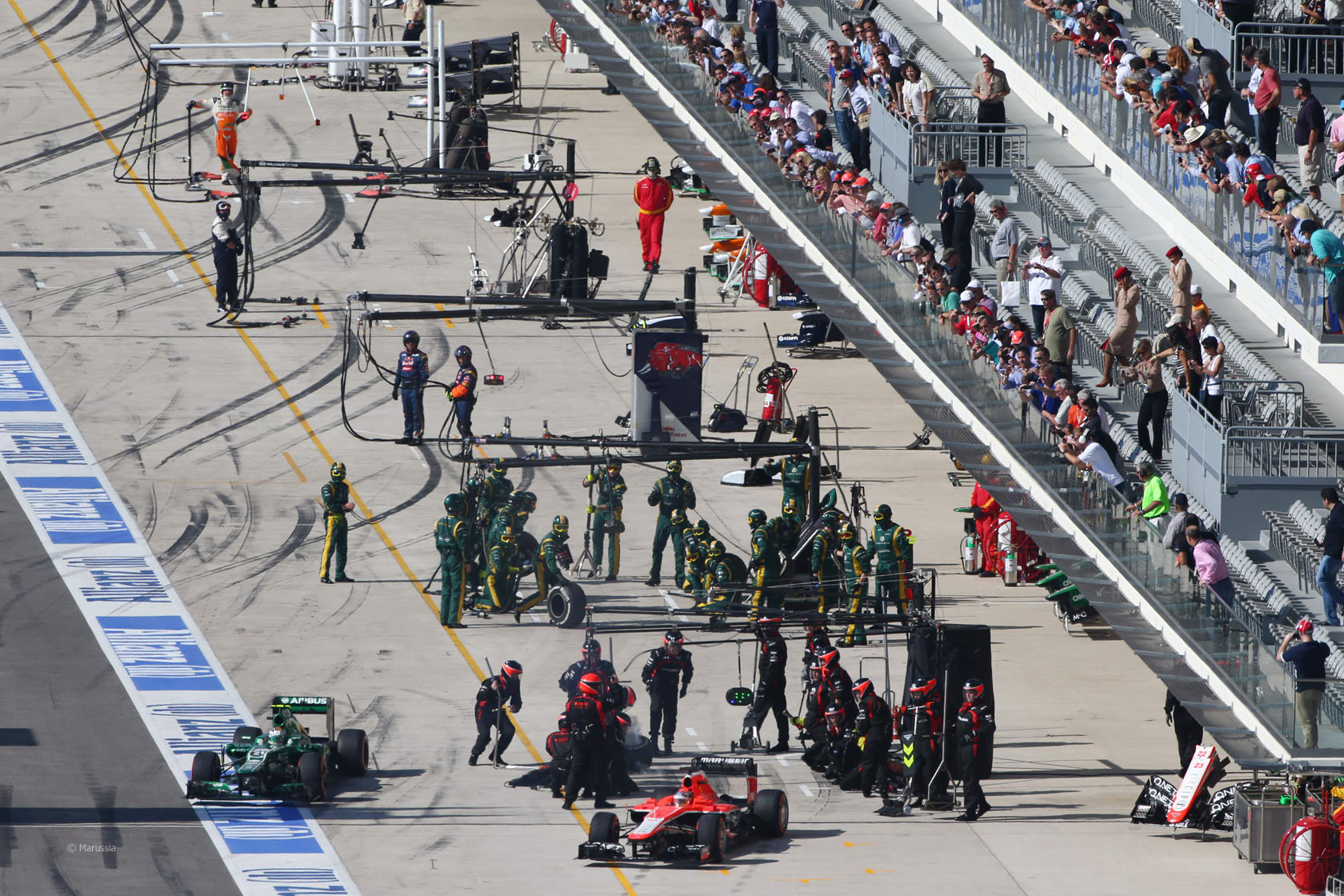 Formula One drivers could be required by the rules to make two pit stops per race in 2014.

F1’s Strategy Group has proposed forcing drivers to pit twice per race and limiting how long each driver can run on each type of tyre, according to a report in Autosport.

Would this be a positive change for the sport?

The proposed change would impose tight limits on how long each driver could run on a set of tyres for, reducing their incentive to preserve their tyres. Excessive tyre preservation has been a criticism of racing this year.

This could also have a safety benefit, as drivers would not be able to run the tyres until they are at risk of failing. At the Indian Grand Prix this year Pirelli expressed concerns over teams running the tyres for longer stints than they felt was safe.

Forcing drivers to make a minimum number of pit stops could reduce the scope for variety in the racing. On several occasions this year battles for position have been created by drivers making fewer pit stops than their rivals, which will be harder to do with these restrictions.

Races which feature a single pit stop for most drivers are not necessarily viewed as boring. For example last year’s United States Grand Prix was rated as one of the best dry races of the season.

Ensuring that drivers use tyres safely would be better achieved by giving them more time to test them, which has already been arranged for next year.

This proposal would further reduce the freedom drivers and teams have with their tyre strategies. But past attempts to do so by forcing them to use both tyre compounds during races (in effect, requiring one mandatory pit stop) and making the top ten qualifiers start on used tyres have not achieved this goal.

It’s not hard to see why. Genuinely exciting racing comes from the unpredictable and unexpected. Rules such as these serve only to make racing more predictable and less exciting.

I’ve watched DTM and A1 Grand Prix races with multiple mandatory tyre stops and found the inevitability of each pit stop made for unexciting, dumbed-down racing. Formula One should avoid making the same mistake by replacing genuine racing strategy with fixed-duration tyre stints.

Instead of dubious sticking-plaster solutions like this F1 needs to address the deeper problems inhibiting good racing which have been ignored for too long. Such as how aerodynamic turbulence prevents cars from following each other closely, and why F1 hasn’t had a full grid for 18 years.

Do you want to see more mandatory pit stops in F1? Cast your vote below and have your say in the comments.

Should drivers be required to make two pit stops per race in 2014?

An F1 Fanatic account is required in order to vote. If you do not have one, register an account here or read more about registering here.

Browse all debates and polls

169 comments on “Should F1 drivers be forced to make two pit stops?”