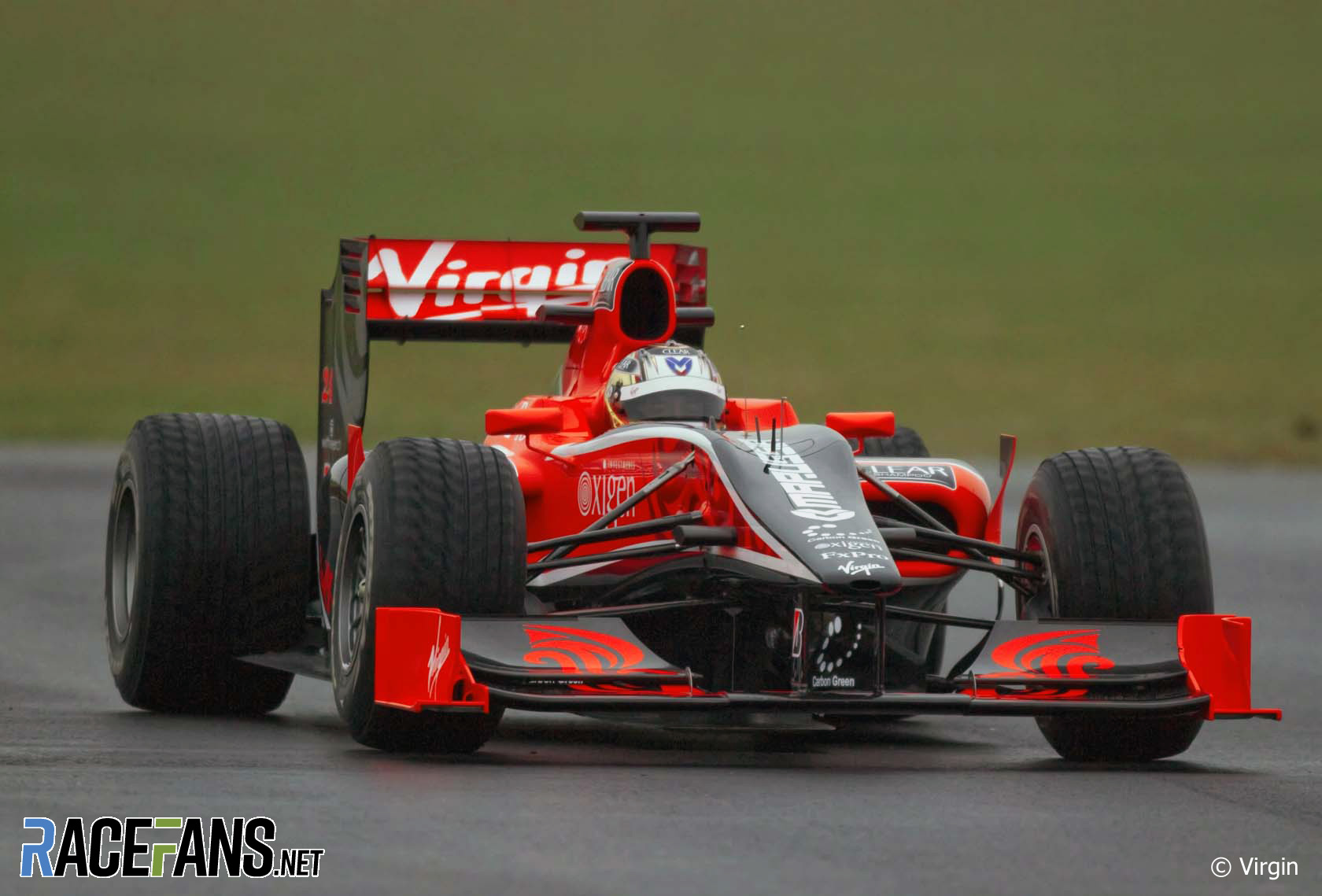 Virgin Racing are the first of the new F1 teams to launch their 2010 car.

See below for more pictures and information about the VR-01.

Designer Nick Wirth has created the VR-01 entirely using Computational Fluid Dynamics computer modelling. This is not a new technology for F1 – but relying on it instead of a wind tunnel to create a new car is a novel approach.

Today is a very proud day for everyone involved with Virgin Racing, however on this occasion, where the car is the star, I want to pay tribute to all the amazing people at Wirth Research who deserve so much of the credit for the VR-01. Putting together an F1 team, assembling an engineering group and designing a new car from scratch is an epic task in the timeframe we have been working to.

I have been fortunate to have worked with the very best designers in F1 and I am well aware of exactly what it takes to be successful in this sport. When you see what the existing teams have achieved using the conventional but proven design approach, it is unsurprising that there is a great deal of scepticism about our all-CFD approach. But we are competing in a sport that is undergoing significant change having come face to face with today’s harsh economic realities. Under resource restriction, convention will become too costly and necessity really will be the mother of invention. I have absolute belief in the digital design process and the opportunity to put the all-CFD approach to the test at the highest level – to demonstrate that this could be the way for the future of F1 – is very, very exciting.
Nick Wirth

Not only do we have a great bunch of people at Virgin Racing, we also have a great-looking car. We are delighted with our fantastic new livery which provides a fitting integration of our racing brand with our important commercial partnerships. All in all, we have a lot to look forward to as we progress towards our racing debut in Bahrain next month.
John Booth

He also explained why the car was not ready in time for the test at Valencia this week:

The first stage in our on-track evaluation programme is our two-day shakedown at Silverstone on Thursday and Friday this week, where we will conduct systematic testing and confidence-building of all car parts and on-car systems. It was always intended that we would miss the first all-team test in Valencia this week and very early on we targeted the second Jerez test in two weeks’ time for our public testing debut. It is a testament to our methodical approach and the sheer hard work of the team that we are heading to Spain a week earlier than planned to take part in the first Jerez test next week.
John Booth

I’m sure we will be measured by how fast the car is on the track in Jerez next week, but I hope that doesn’t overshadow the far bigger achievement of pulling an entire racing team together and taking a brave step that defies convention. In many ways this is an exploration, but given the absolute self-belief we have seen, I can’t help but feel very excited about what we can go on to achieve in the years ahead.

For now though I’m looking forward to seeing the VR-01 on track in testing in the coming weeks as we prepare for Virgin Racing’s very first grand prix.
Richard Branson